Tablet Fever is all in the air. And with these Karbonn mobiles has also jumped into tablet business and has launched 7-inch Karbonn Smart Tab 1 with loaded features like latest version of Google’s Android OS with free upgrade to Android 4.1(Jelly Bean), capacitive touch screen, Wi-Fi & 3G support, Camera and many more exiting features. Karbonn Mobiles has collaborated with California based MIPS Technologies for its technology to design the Tabs chip and alliances with China-based Ingenic Semiconductor to develop its processor. The Karbonn Smart Tabs is now open for its pre-booking through its website and priced at just Rs.6, 990/- only along with attractive freebies.

With its standard set of features of the mobile platform it has Android 4.0 as its OS with a free upgrade to 4.1 Jelly Bean with 7-inch display of 800 X 480 pixels, 5 Point Multi capacitive touch screen, 1.2 GHz X-Burst processor, 1 GB of internal memory and 32GB of expandable memory through microSD card slot and a 2 MP front-facing camera. 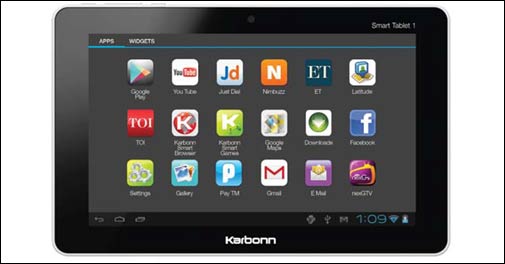 Karbonn Smart Tab 1 comes with 1.2 GHz X-Burst processor. It has a 7.1-inch capacitive nice commanding multi touch screen display with 480 x 800 pixel resolution with good color and brightness. The 2MP front facing camera is capable of taking high quality stills as well as video shoots with 1080HD video playback and can be used for video calling too. It comes with an internal memory of 1GB which can be extendable up to 32GB. By using external USB Dongle the Karbonn Smart Tab 1 also is connected to 3G and Wi-Fi 802.11 b/g/n. As a freebie it comes with Reliance Net-connect. The HDMI port can be connected to HDTV and it supports HD video playback up to 1080p. It also has other applications like 3D gravity sensor, pre-embedded applications like Face-book. User can enjoy these features with a strong 3700 mAH battery.

Latest Android OS version called ice cream sandwich which can be upgraded to Jelly Bean. It also comes with apps like Karbonn Smart browser, games, NextGTv and apps store from where user can download their favorite apps.

The white color Karbonn Smart Tab 1 with black colored front face is covered with glass over its edges. The camera is at the center of the right side on top of the screen and the port is towards the left side of the tab. The ports include 3.5 mm jack, HDMI, mini USB, micros and charging socket. The physical keys on the Tab provided options for power, options, home and return keys. 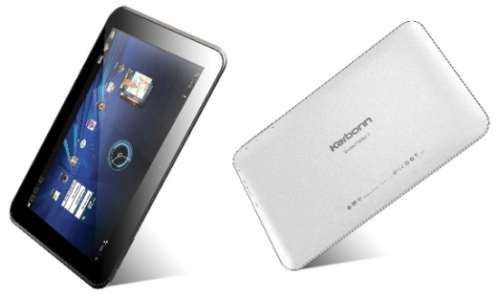 The 1.2 GHz X-burst processor gives acceptable lag within limits while playing video or opening any application is also smooth.

The HDMI port enables the user to connect HDTV or any TV with HDMI port and will convert the TV to an Android TV as the tablet screen gets displayed on it. And once it gets converted user can even surf net, watch movies, pictures or videos stored on the tablet or listen to music.